Wild In The Country Ltd were pleased to take part in the day’s events at this year’s North Norfolk Country Fair 2015 at Weybourne.  Their was great crowd attendance, various acts going on around the arena, and despite the weather, the ferrets were on top performance ready to race, with a draw being had in the first race –  a rare event, but you can never tell with ferret racing what’s going to happen.

Wild In The Country compere, Malachy de Lacy, didn’t want to see another draw occur so he prepped the crowds ready to provide their loudest cheers of encouragement, for a final ferret race to close the day’s events.  By this time thankfully the rain had disappeared, and the crowds were ready to participate and cheer on their favourite ferret.

The ferret handlers were picked, the first two handlers jumping the fence in eagerness.  The next two were two girls ready to control Bad Boy Bubba,  Crazyjack’s handler was a very keen Dad claiming it was his son who wanted to be in the ring, but we all knew better, and finally a brother and sister who wanted to support the ferret everyone loves to hate!  The crowds picked their favourite ferrets to cheer on, or in the case of Ratso, boo on (no tears this time though thankfully).  It was hard to judge who the winning ferret would be.

It was very close ferret race, Sexy Beast being the favourite ferret and certainly being cheered on well by the supporters, but in the end the winning ferret was Crazyjack, with a delighted handler and son! 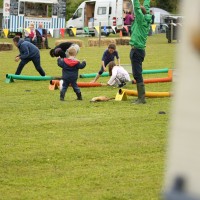 Happy handler as his ferret proves to be the winning ferret. 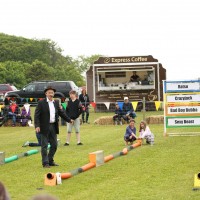 Thank you Norfolk for another year of Ferret Racing for Wild In The Country Ltd, we had a great time and look forward to seeing you again.